Skip to content
HomeHow Much Does Your Software Weigh, Mr Architect?

Three apparently unrelated events actually have a serendipitous connection which have led to the title of this weeks blog. First off, Norman Foster (he of the “Gherkin” and “Wobbly Bridge” fame) has had a film released about his life and work called How Much Does You Building Weigh, Mr Foster. As a result there have been a slew of articles about both Foster and the film including this one in the Financial Times. One of the things that comes across from both the interviews and the articles about Foster is the passion he has for his work. After all, if you are still working at 75 then you must like you job a little bit! One of the quotes that stands out for me is this one from the FT article:

“The architect has no power, he is simply an advocate for the client. To be really effective as an architect or as a designer, you have to be a good listener.”

How true. Too often we sit down with clients and a jump in with solutions before we have really got to the bottom of what the problem is. It’s not just about listening to what the client says but also what she doesn’t say. Sometimes people only say what they think you want them to hear not what they really feel, So, it’s not just about listening but developing empathy with the person you are architecting for. Related to this is not closing down discussions too early before making sure everything has been said which brings me to the second event.

I’m currently reading Resonate by Nancy Duarte which is about how to put together presentations that really connect with your audience using techniques adopted by professional story tellers (like film makers for example). In Duarte’s book I came across the diagram below which Tim Brown also uses in his book Change by Design. 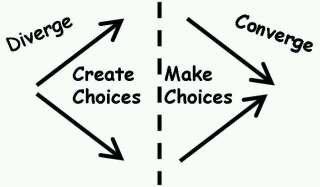 For me the architects sits above the dotted line in this picture ensuring as many choices as possible get made and then making decisions (or compromises) that are the right balance of the sometimes opposing “forces” of the requirements that come from multiple choices.

One of the big compromises that often needs to be made is how much can I deliver in the time I have available and, if its not everything, what is dropped? Unless the time can change then its usually the odd bit of functionality (good if these functions can be deferred to the next release) or quality (not good under any circumstances). This leads me to the third serendipitous event of the week: discovering “technical debt”.

Slightly embarrassingly I had not heard of the concept of technical technical debt before and it’s been around for a long time. It was originally proposed by Ward Cunningham in 1992 who said the following:

Shipping first time code is like going into debt. A little debt speeds development so long as it is paid back promptly with a rewrite… The danger occurs when the debt is not repaid. Every minute spent on not-quite-right code counts as interest on that debt. Entire engineering organizations can be brought to a stand-still under the debt load of an unconsolidated implementation.

Technical debt is a topic that has been taken up by the Software Engineering Institute (SEI) who are organising a workshop on the topic this year. One way of understanding technical debt is to see it as the gap between the current state of the system and what was originally envisaged by the architecture. Here, debt can be “measured” by the number of known defects and features that have not yet been implemented. Another aspect to debt however is the amount of entropy that has set in because the system has decayed over time (changes have been made that were not in line with the specified architecture). This is a more difficult thing to measure but has a definite cost in terms of ease of maintenance and general understandability of the system.

Which leads to the title of this weeks blog. Clearly software (being ‘soft’) carries no weight (the machines it runs on do not count) but nonetheless can have a huge, and potentially damaging weight in terms of the debt it may be carrying in unstructured, incorrect or hard to maintain code. Understanding the weight of this debt, and how to deal with it, should be part of the role of the architect. The weight of your software may not be measurable in terms of kilograms but it surely has a weight in terms of the “debt owed”.

3 thoughts on “How Much Does Your Software Weigh, Mr Architect?”