WikiWikiWeb is one of the first wiki experiences I, and I suspect many people of a certain age, had. WikiWikiWeb was created by Ward Cunningham for the Portland Pattern Repository, a fantastic source of informal guidance and advice by experts on how to build software. It contains a wealth of patterns (and antipatterns) on pretty much any software topic known to man and a good few that are fast disappearing into the mists of time (TurboPascal anyone?).For a set of patterns related to the topics I cover in this blog go to the search page, type ‘architect’ into the search field and browse through some of the 169 (as of this date) topics found.  I was doing just this the other day and came across the ArchitectsDontCode pattern (or possibly antipattern). The problem statement for this pattern is as follows:

The System Architect responsible for designing your system hasn’t written a line of code in two years. But they’ve produced quite a lot of ISO9001-compliant documentation and are quite proud of it.

The impact of this is given as:

Hmmm, pretty damning for System Architects. Just for the record such a person is defined here as being:

[System Architect] – A person with the leading vision, the overall comprehension of how the hardware, software, and network fit together.

The meaning of job titles can of course vary massively from one organisation to another. What matters is the role itself and what that person does in the role. It is often the case that any role with ‘architect’ in the title is much denigrated by developers, especially in my experience on agile projects, who see such people as being an overhead who contribute nothing to a project but reams of documents, or worse UML models, that no one reads.

Sometimes software developers, by which I mean people who actually write code for a living, can take a somewhat parochial view of the world of software. In the picture below their world is often constrained to the middle Application layer, that is to say they are developing application software, maybe using two or three programming languages, with a quite clear boundary and set of requirements (or at least requirements that can be fairly easily agreed through appropriate techniques). Such software may of course run into tens of thousands of lines of code and have  several tens of developers working on it. There needs therefore to be someone who maintains an overall vision of what this application should do. Whether that is someone with the title of Application Architect, Lead Programmer or Chief Designer does not really matter; it is the fact they look after the overall integrity of the application that matters. Such a person on a small team may indeed do some of the coding or at least be very familiar with the current version of whatever programming language is being deployed. 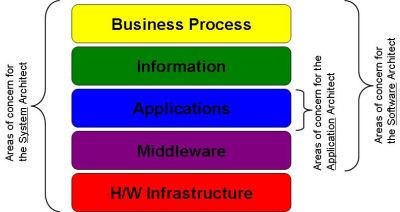 In the business world of bespoke applications, as opposed to ‘shrink-wrapped’ applications, things are a bit more complicated. New applications need to communicate with legacy software and often require middleware to aid that communication. Information will exist in a multitude of databases and may need some form of extract, transform and load (ETL) and master data management (MDM) tools to get access to and use that information as well as analytics tools to make sense of it. Finally there will be business processes that exist or need to be built which will coordinate and orchestrate activities across a whole series of new and legacy applications as well as manual processes. All of these require software or tooling of some sort and similarly need someone to maintain overall integrity. This I see as being the domain, or area of concern, of the Software Architect. Does such a person still code on the project? Well maybe, but on typical projects I see it is unlikely such a person has a much time for this activity. That’s not to say however that she needs some level of (current) knowledge on how all the parts fit together and what they do. No mean task on a large business system.

Finally all this software (business processes, data, applications and middleware) has to be deployed onto actual hardware (computers, networks and storage). Whilst the choice and selection of such hardware may fall to another specialist role (sometimes referred to as an Infrastructure or Technical Architect) there is another level of overall system integrity that needs to be maintained. Such a role is often called the System Architect or maybe Chief Architect. At this stage it is possible that the background of such a person has never involved coding to any great degree so such a person is unlikely to write any code on a project and quite rightly so! This is often not just a technical role that worries about systems development but also a people role that worries about satisfying the numerous stakeholders that such large projects have.

Where you choose to sit in the above layered model and what role you take will of course depend on your experience and personal interests. All roles are important and each must work together if systems, that depend on so many moving parts, are to be delivered in time and on budget.