Bob Metcalfe, the founder of 3Com and co-inventor of  Ethernet has said:

Be prepared to learn how the growth of exponential and disruptive technologies will impact your industry, your company, your career and your life.

Examples of disruptive innovations (and what they have disrupted/displaced) are:

The above are all examples of technologies/innovations that have disrupted existing business models, or even whole industries. However there is another class or type of disruptive innovation which not only disrupts a market but creates a whole new ecosystem upon which a new industry can be created. Examples of these are the likes of Facebook, Twitter and iTunes. What these have provided, as well, are a platform upon which providers, complementors, users and suppliers co-exist to support, nurture and grow the ecosystem of the platform and create a disruptive technology platform (DTP). Here’s a system context diagram for such a platform. 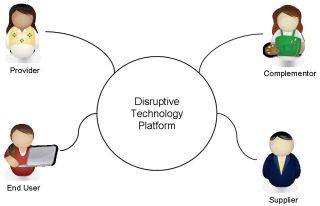 The four actors in this system context play the following roles:

If we use Facebook (the platform) as a real instance of the above then the provider is Facebook (the company) who have created a platform that is extensible through a well defined set of interfaces. Complementors are the many third party providers who have developed new features to extend the underlying platform (e.g. Airbnb and The Guardian). End uers are, of course, the 800 million or so people who have Facebook accounts. Suppliers would be the companies who, for example, provide the hardware and software infrastructure upon which Facebook runs.

These are just some of the attributes I would expect a DTP to have, there must be more. Feel free to comment and provide some observations on what you think constitutes a DTP.