There has been much discussion here in the UK over the last couple of years about the state of tech education and what should be done about it. The concern being that our schools are not doing enough to create the tech leaders and entrepreneurs of the future.

The current discussion kicked off  in January 2011 when Microsoft’s director of education, Steve Beswick, claimed that in UK schools there is much “untapped potential” in how teenagers use technology. Beswick said that a Microsoft survey had found that 71% of teenagers believed they learned more about information technology outside of school than in formal information and communication technology (ICT) lessons. An interesting observation given that one of the criticisms often leveled at these ICT classes is that they just teach kids how to use Microsoft Office.The discussion moved in August of 2011, this time at the Edinburgh International Television Festival where Google chairman Eric Schmidt said he thought education in Britain was holding back the country’s chances of success in the digital media economy. Schmidt said he was flabbergasted to learn that computer science was not taught as standard in UK schools, despite what he called the “fabulous initiative” in the 1980s when the BBC not only broadcast programmes for children about coding, but shipped over a million BBC Micro computers into schools and homes.

January 2012 saw even the schools minister, Michael Gove, say that the ICT curriculum was “a mess” and must be radically revamped to prepare pupils for the future (Gove suspended the ICT Curriculum in September 2012). All well and good but as some have commented “not everybody is going to need to learn to code, but everyone does need office skills”.

In May 2012 Schmidt was back in the UK again, this time at London’s Science Museum where he announced that Google would provide the funds to support Teach First – a charity which puts graduates on a six-week training programme before deploying them to schools where they teach classes over a two-year period.

So, what now? With the new ICT curriculum not due out until 2014 what are the kids who are about to start their GCSE’s to do? Does it matter they won’t be able to learn ICT at school? The Guardian’s John Naughton proposed a manifesto for teaching computer science in March 2012 as part of his papers digital literacy campaign.  As I’ve questioned before should it be the role of schools to teach the very specific programming skills being proposed; skills that might be out of date by the time the kids learning them enter the workforce? Clearly something needs to be done otherwise, as my colleague Dr Rick Robinson says, where will the next generation of technology millionaires come from? 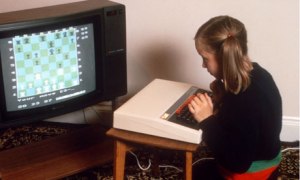 Whatever shape the new curriculum takes, one example (one that Eric Schmidt himself used) of a success story in the learning of IT skills is that of the now almost legendary BBC Microcomputer. A project started 30 years ago this year. For those too young to remember, or were not around in the UK at the time, the BBC Microcomputer got its name from project devised by the BBC to enhance the nation’s computer literacy. The BBC wanted a machine around which they could base a series called The Computer Programme, showing how computers could be used, not just for computer programming but also for graphics, sound and vision, artificial intelligence and controlling peripheral devices. To support the series the BBC drew up a spec for a computer that could be bought by people watching the programme to actually put into practice what they were watching. The machine was built by Acorn the spec of which you can read here.

The BBC Micro was not only a great success in terms of the television programme, it also helped spur on a whole generation of programmers. On turning the computer on you were faced with the screen on the right. The computer would not do anything unless you fed it instructions using the BASIC programming language so you were pretty much forced to learn programming! I can vouch for this personally because although I had just entered the IT profession at the time this was in the days of million pound mainframes hidden away in backrooms guarded jealously by teams of computer operators who only gave access via time-sharing for minutes at a time. Having your own computer which you could tap away on and get instant results was, for me, a revelation.

Happily it looks like the current gap in the IT curriculum may about to be filled by the humble Raspberry Pi computer. The idea behind the Raspberry Pi came from a group of computer scientists at Cambridge, England’s computer laboratory back in 2006. As Ebon Upton founder and trustee of the Raspberry Pi Foundation said:

Something had changed the way kids were interacting with computers. A number of problems were identified: the colonisation of the ICT curriculum with lessons on using Word and Excel, or writing webpages; the end of the dot-com boom; and the rise of the home PC and games console to replace the Amigas, BBC Micros, Spectrum ZX and Commodore 64 machines that people of an earlier generation learned to program on.

Out of this concern at the lack of programming and computer skills in today’s youngsters was born the Raspberry Pi computer (see below) which began shipping in February 2012. Whilst the on board processor and peripheral controllers on this credit card sized, $25 device are orders of magnitude more powerful than anything the BBC Micros and Commodore 64 machines had, in other ways this computer is even more basic than any of those computers. It comes with no power supply, screen, keyboard, mouse or even operating system (Linux can be installed via a SD card). There is quite a learning curve just to get up and running although what Raspberry Pi has going for it that the BBC Micro did not is the web and the already large number of help pages as well as ideas for projects and even the odd Raspberry Pi Jam (get it). Hopefully this means these ingenious devices will not become just another piece of computer kit lying around in our school classrooms.

The Computer Literacy Project (CLP) which was behind the idea of the original BBC Micro and “had the grand ambition to change the culture of computing in Britain’s homes” produced a report in May of this year called The Legacy of the BBC Micro which, amongst other things, explores whether the CLP had any lasting legacy on the culture of computing in Britain. The full report can be downloaded here. One of the recommendations from the report is that “kit, clubs and formal learning need to be augmented by support for individual learners; they may be the entrepreneurs of the future“. 30 years ago this support was provided by the BBC as well as schools. Whether the same could be done today in schools that seem to be largely results driven and a BBC that seems to be imploding in on itself is difficult to tell.

And so to the point of this post: is the Raspberry Pi the new BBC Micro in the way it spurred on a generation of programmers that spread their wings and went on to create the tech boom (and let’s not forget odd bust) of the last 30 years? More to the point, is that what the world needs right now? Computers are getting getting far smarter “out of the box”. IBM’s recent announcements of it’s PureSystems brand promise a “smarter approach to IT” in terms of installation, deployment, development and operations. Who knows what stage so called expert integrated systems will be at by the time today’s students begin to hit the workforce in 5 – 10 years time? Does the Raspberry Pi have a place in this world? A world where many, if not most, programming jobs continue to be shipped to low cost regions, currently the BRIC, MIST countries and so on, I am sure, the largely untapped African sub-continent.

I believe that to some extent the fact that the Raspberry Pi is a computer and yes, with a bit of effort, you can program it, is largely an irrelevance. What’s important is that the Raspberry Pi ignites an interest in a new generation of kids that gets them away from just consuming computing (playing games, reading Facebook entries, browsing the web etc) to actually creating something instead. It’s this creative spark that is needed now, today and as we move forward that, no matter what computing platforms we have in 5, 10 or 50 years time, will always need creative thinkers to solve the worlds really difficult business and technical problems.

And by the way my Raspberry Pi is on order.

Readers of this blog will know that one of my interests/research areas is how to effectively bring together left-brain (i.e. logical) and right-brain (i.e. creative) thinkers in order to drive creativity and generate new and innovative ideas to solve some of the worlds wicked problems. One of the books that have most influenced me in this respect is Daniel Pink’s A Whole New Mind – Why Right-Brainers Will Rule the Future. Together with a colleague I am developing the concept of the versatilist (first coined by Gartner) as a role that effectively brings together both right- and left-brain thinkers to solve some of the knotty business problems there are out there. As part of this we are developing a series of brain exercises that can be given to students on creative, problem solving courses to open up their minds and start them thinking outside the proverbial box. One of these exercises is called What Would Google Do? The idea being to try and get them to take the non-conventional, Google, view of how to solve a problem. By way of an example Douglas Edwards, in his book I’m Feeling Lucky – The Confessions of Google Employee Number 59, relates the following story about how Sergey Brin, co-founder of Google, proposed an innovative approach to marketing.“Why don’t we take the marketing budget and use it to inoculate Chechen refugees against cholera. It will help our brand awareness and we’ll get more new people to use Google.”

Just how serious Brin was being here we’ll never know but you get the general idea; no idea is too outrageous for folk in the Googleplex.

To further backup how serious Google are about creativity their chairman Eric Schmidt, delivered a “devastating critique of the UK’s education system and said the country had failed to capitalise on its record of innovation in science and engineering” at this year’s MacTaggart lecture in Edinburgh.  Amongst other criticisms Schmidt aimed at the UK education system he said that the country that invented the computer was “throwing away your great computer heritage by failing to teach programming in schools ” and was flabbergasted to learn that today computer science isn’t even taught as standard in UK schools. Instead the IT curriculum “focuses on teaching how to use software, but gives no insight into how it’s made.” For those of us bought up in the UK at the time of the BBC Microcomputer hopefully this guy will be the saviour of the current generation of programmers.

US readers of this blog should not feel too smug, check out this YouTube video from Dr. Michio Kaku who gives an equally devastating critique of the US education system.

So, all in all, I think the world definitely needs more of a versatilist approach, not only in our education systems but also in the ways we approach problem solving in the workplace. Steve Jobs, the chief executive of Apple, who revealed last week that he was stepping down once told the New York Times: “The Macintosh turned out so well because the people working on it were musicians, artists, poets and historians – who also happened to be excellent computer scientists”. Once again Apple got this right several years ago and are now reaping the benefits of that far reaching, versatilist approach.